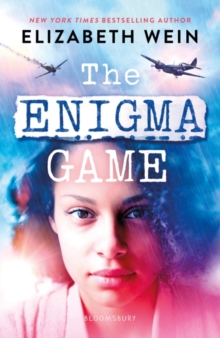 Set during the Second World War, The Enigma Game takes place near an RAF base in Scotland, in a local inn. The airman leave silver sixpences in the cracks in the wooden mantlepiece and use the money for a pint of beer on their safe return.

The guests staying at the inn include Louisa Adair, a girl with Jamaican ancestry who is looking after the elderly aunt of the landlady. Her name is Jane Warner, not her real name, having changed it from the German Frau von Arnim. The other lodger is Ellen, a traveller who works as a driver on the RAF base. Three different characters, who will all play their important part in the story and the war effort. The adventure begins when they find a code machine that has been left in the inn. Can they crack the code and help the airmen at the RAF base?

There are characters in this story from Elizabeth Wein’s World War 2 stories, The Pearl Thief, and Codename Verity, but this can be read as a standalone. As usual Elizabeth Wein’s in depth research shines through making the story fly by with twists and turns.

I was given this book by the publisher for an honest and frank review.