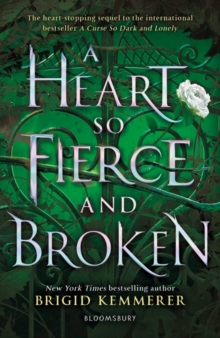 This is the sequel to “A Curse So Dark and Lonely” where we met Harper, transported from D. C. to the parallel universe of Emberfall to break a curse that Prince Rhen is under. We also met Grey, Rhen’s guard commander. “A Curse so Dark and Lonely” was Rhen and Harper’s story and this new sequel follows Grey and his struggles with himself as discovers his true identity.

He travels to Syhl Shallow and encounters the enemy queen and her daughters. Lia Mara, the older daughter is being passed over in favour of her younger sister in the line of succession, but Lia Mara is the diplomat. Grey is forced into a situation where he must decide finds his allegiances are, for or against Rhen. Can two countries at war find peace?

A wonderful sequel, Emberfall and Syhl Shallow is a believable world, that captures and draws you in. The characters are well written and although this isn’t the genre that I usually read I thoroughly enjoyed this modern fairy tale.

I was given this book by the publisher for a frank and honest review.